A Quote Tweet can be performed on a mobile device and on your web browser when you go to Twitter.com. There are also 3rd party applications like Hootsuite that will also allow you to modify a retweet. But when you are on Twitter with your mobile device, or go to twitter.com, you can perform a Quote Tweet.

Just press the “Retweet” symbol [circled in the image below] and then select “Quote Tweet”. 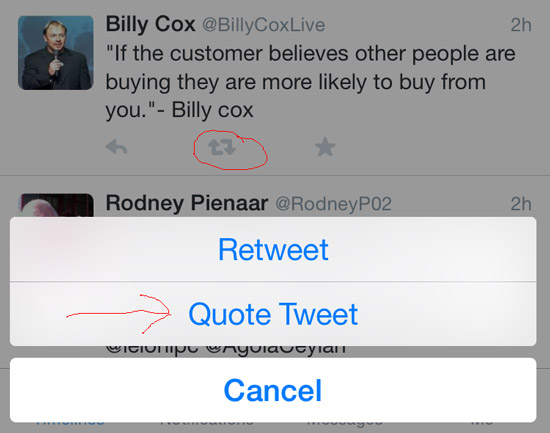 Things to keep in mind when you do a Quote Tweet:

There are times when you want to add more to what was originally shared on Twitter. Maybe you have more information that should be added. Maybe you want to make sure that someone specifically sees that tweet. Maybe you want to thank the person who tweeted. What ever the reason, a “Quote Tweet” is a great way to add value.

Have a great day in business.